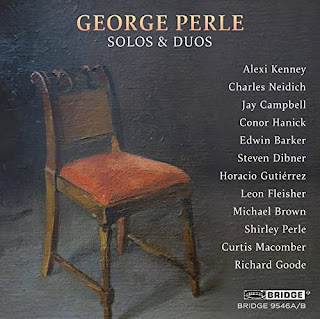 George Perle (1915-2009) is one of those New Music composers whose importance was perhaps overshadowed by the vagaries of fortune. It wasn't so much that he was unknown, but then he might have been performed more often than he was, maybe. At any rate he was an American Modernist of a very accomplished sort and any earnest recorded attention devoted to his music is something New Music lovers should find of interest. I think back to a New Music concert I attended in New York as early as 1972. There was a Perle work on the program and I liked it much, but then for whatever reason, I never quite found things to check out on record to speak of. I suspect part of that was my fault but at any rate I am glad his music has become increasingly available in recent decades. On here for example I happily reviewed a BMOP recording of his "Serenades" in 2019. Look it up for more about him and his music.

So in that vein a significant new release has come across my desk and I duly report in after a bunch of listens. It's a two-CD set of Perle Solos & Duos (Bridge 9546A/B). On it we are introduced to some 16 works, a number with several movements, all focused around the simple presence of one or two instrumentalists and the Perle magic. He is a committed High Modernist and so the music has the full-fledged edgy harmonic-melodic underpinnings and asymmetrical and non-repetitive rhythmic thrusts one might expect to find in this style set. Yet too it sports a definite individuality if you give it the requisite time to become familiar with it all.

So in the course of the two-CD's unfolding we hear several solo piano works, several solo violin pieces, a work for solo clarinet, one for clarinet and piano, one for violin and piano, one for cello, two for cello and piano,  for double bass, and two for bassoon. The works cover a wide range of time between 1943 and 2004. There is a kind of unified expressionist High Modernism at play throughout and perhaps the principal variable is the idiomatic writing for each instrument.

The instrumentalists are all well prepared and well endowed with technical prowess so that each piece gets a concentrated focus and comes off well without exception. Richard Goode is on piano for one of the works, so that gives you some idea of the high caliber of all involved.

The seriousness of intent and the comprehensive instrumental possibilities make this a welcome addition for all those who appreciate George Perle or would like to explore his works and do not know a great deal of his music as yet. Either way this is a fine program. I recommend it strongly.

Posted by Grego Applegate Edwards at 8:02 AM