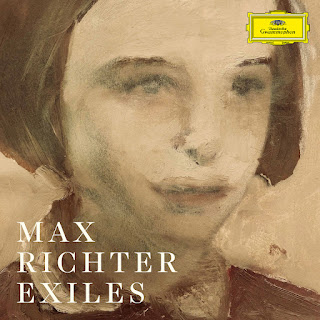 Sometimes lately I do some internet work in the morning and just keep playing the featured selection while I am doing that. By the time I am ready to write about it I get four-square insight into just how much the music is getting to me, or of course sometimes less so. Today the selection is orchestral music by Max Richter, a volume entitled Exiles (Deutsche Grammophon 486-0445).

Now I've heard some of Richter's music in the past and generally liked it, but it did not stick in my head very long. That sometimes has to do with a particular time frame where you might have been distracted or was not able to listen without interruption. Well no matter. This Max Richter album gives us a well-rounded portrait of the artist with six works. all distinctive in their own way. Think of Barber's "Adagio," Arvo Part's instrumental writing, the expressivity of later Glass--now do not expect to hear exactly that but something Richter establishes as his in part certainly of the later Minimalist camp but unwinding as more ostinato-like as in Pachebel's Cannon at times--in other words more at times an ostinato bubbling up against other ostinatos and an expressivity that does not rely on the kind of dervish entrancement of earlier Minimalism.

Each of the six works linger almost timelessly at some point. They establish themselves on their own ground each one and than travels along on the special path the work defines and then travels, each in its very own way, building contrasting ostinatos to create a gradually more dense expression. Drones, sustains, lyrical snippets that build atop the flow are significant and enough out-of-the-ordinary/inventive as to make you sit up and take notice.

We should not be surprised if Minimalism stands or falls on the quality of the inventions, just like every other genre and subgenre we have encountered in our musical lives, following from the idea that each genre may have its own parameters on what constitutes good invention. That could easily be the topic for a book and I would love to read such a one or address it myself? No matter right now.

The Baltic Sea Orchestra under Kristian Jarvi sounds just right for the music, feelingful without gushing, accurate without a machine-like sameness. It comes across the more you listen as somehow descriptive of our everyday life nowadays? Easy to say that, no doubt, but seriously it sounds contemporary even Modern without keeping slavishly to a particular thrust.

Posted by Grego Applegate Edwards at 8:10 AM