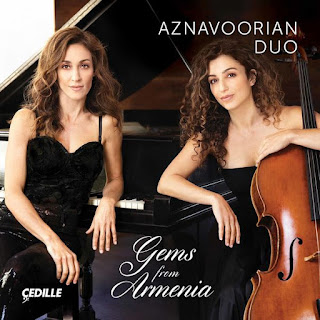 Those who know and love Armenian music like I do no doubt have an aural picture in their minds of what to expect. Part of that has to do with the highly developed and special minor or otherwise distinctly diatonic tonality that has prevailed so happily in the music. There is a new anthology of classical music just out entitled Gems from Armenia (Cedille CDR 90000 209), which consists of some 15 Armenian works for cello and piano, played convincingly and sensitively by the Aznavoorian Duo (Ani, cello, Marta, piano).

It all comes to the listener as a kind of cornucopia of possibilities, beginning with the well-known Komitas Vartabed (1869-1955) and four of his beautifully rhapsodic miniatures. Then follows two short but evocative pieces by perhaps the most well known Armenian composer of our modern times, Aram Khachaturian (1903-1978). It includes "Yerevan," which I suspect any avid music lover will recognize. The cello-piano version sings and soars thanks to the Aznavoorian passion and lilt, so to speak.

The program continues on without the least bit of flagging, so we get works by three more Soviet era composers--Arno Babajanian, Avet Terterian, and Alexander Arutiunian, then works by two present-day living Armenian composers, Serouj Kradjian and Vache Sharafyan. The final item is a specially commissioned work by living American composer Peter Boyer, on the iconic Armenian landmark "Mount Ararat."

All of the works feel like a logical sequence going from the rooted to the refreshing of the aural memory with a wealth of music that should appeal to all who love Armenian or for that matter the world of Asian-Indo classical in the recent past and in the present.

The Aznavoorian Duo make their debut appearance recording here auspiciously. It is a lively and lovely program of melodic and harmonic jewels. There are neo-Romantic elements at times and some in a Modern Neo-Classicist vein, but all have elements of Armenian musical tendencies that are realized with a dedicated devotion by the Aznavoorians.

It is a happy addition to your Armenian collection or for that matter an excellent introduction to Armenian chamber Classical as a Modern whole. Very recommended.

Posted by Grego Applegate Edwards at 8:25 AM