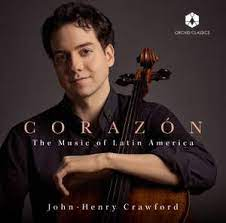 The longer we might live, we who hold music dear, the more there might be if we but open up to it. So today I am appreciating an album by cellist John-Henry Crawford entitled Corazon: The Music of Latin America (Orchid Classics ORC100198). The title says it all, As cellist Crawford tells us in the liners, it all came about when he came to Mexico to compete in the Carlos Prieto Cello Competition in 2019 and won first prize. His time in Mexico for the initial competition and then return visits for performances kindled a love in the cellist for Latin Ameican music and culture.

The album at hand is the fruit of this budding affection for such things, a kind of musical tour through Argentina, Cuba, Brazil and Mexico, covering some 140 years of compositional lyricism and vitality. It centers around Crawford's cello readings of some true gems accompanied quite ably and spiritedly by pianist Victor Santiago Asuncion and guitarist Jiji. Manual Ponce's Sonata for Cello and Piano is the centerpiece of it all and surrounding it are some brilliantly crafted lyrical miniatures by composers we all need to appreciate it seems to me.

So Ponce comes our way through the aforementioned Sonata, the very beautiful and well known "Estralita" in the version here as arranged and made famous by Heifetz and further modified for guitar accompaniment by Jiji. Another Ponce miniature graces the program and we appreciate that as we also get more gems by the likes of Leo Brouwer, Villa-Lobos, Carlos Quastavino, Egberto Gismonti, and Astor Piazzolla. The Corazon theme applies as much to the repertoire as to Maestro Crawford's engaging affection and devotion to the musical finery we are happy to be inundated with from start to finish.

Maestro Crawford burnishes his sound with a warming glow that suits well the warmth and lovingly insistent lyricism of the entire program. It is excellently played and a font of vibrancy throughout. Heartily recommended for a most engaging romp through Latin American masterpieces. Bravo!

Posted by Grego Applegate Edwards at 10:41 AM