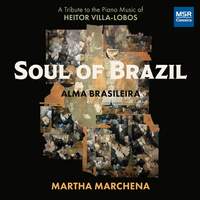 All, or most all of us who explore Modern Classical have listened to the piano music of Heitor Villa-Lobos at least some over the years, depending in part on how old you are, with age accentuating the probability of such things. I have come away from it with a feeling that the opus has much to appreciate about it but also that the piano music stands virtually alone in that there are lyrical reflections and harmonic-rhythmic stridencies not entirely relatable to the rest of the Villa-Lobos repertoire. With a new volume devoted to selected piano works as played by Martha Machena, we get another opportunity to consider some choice pieces. All this on the CD entitled Soul of Brasil: Alma Brasileira (MSR Classics MS 1764).

Martha Marchena, a pianist of Cuban abstraction, did her doctoral thesis on Villa-Llobos. It is clear from this recording that she is very sympatico with his brilliant musical inventions. As we hear the nicely chosen variety of works presented here, we of course hear moments where the folkloric Brazilian music roots are very much out front. Yet there are reworkings in this music and a stance towards the piano that go a considerable distance into the poetic piano arts for their own sake. So there can be thoughtful expressive rubato and clangorously striking dynamics. Of course no matter the configuration Villa-Lobos nearly always has a musical agenda a good deal more complex at times than a facile sort of Nationalism would suggest.

Still, for example as you hear Ms. Marchena's boldly energetic foray into the "Jungle Festival" movement of his "Ciclo Brasileiro," it is the direct allusion to folk roots that delights the senses as it gives us a most lovely Villa-Lobos approach to folk transformation. And in the end there is ever some perhaps more subtle references to his country's musical ways. Perhaps  it is the way Villa-Lobos applies his brilliance to the piano as a virtuoso and inimitable musical vehicle that stands out in these works.

The five pieces presented here ("Alma Brasileiros," "Rudepoema," "Valso Da Dor," "Bachianas Brasileiras No. 4" and the "Ciclo Brasileiro") stand out in the hands of Martha Marchena as music well worth reconsideration as some gems of the earlier Modern era. At the same time they reassure us that Ms. Marchena is just the artist to pull off the complexities and turbulent lyricism the piano cycles can express so nicely.

Posted by Grego Applegate Edwards at 7:35 AM