Cello Lounge by Borislove and Noizepunk: Gene Pritsker Conflates Category to Produce His Own Blend 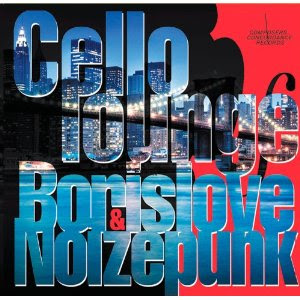 Romantic classical, hip-hop, and electronica combine is unusual ways on the new Composers Coincordance Records (004) release Cello Lounge. Here we have cellist Borislav Strulev and composer-instrumentalist Gene Pritsker under the nom de plume Borislove Noizepunk. It is an album of collage, of beats, electronic manipulation, sampling, keyboard, guitar and the art of the cello.

Gene presents extended and looped romantic-era melodics from well-known works (primarily with Boris's cello taking on those lines) along with what sounds like newly composed lines, all within the context of the sound of altered samples, electronic drum back-beats, and a kind of electronic orchestra. Boris adds written and/or improvised lines over the top as well.

This sounds like a kind of hip-hop concerto for cello at times; other times it exudes the dynamic rock guitar of Gene's in tandem with the cello and electronica.

It is music of a piece, a music unified in an unexpected and unprecidented way. It will not be for everyone. But those who are willing to leave preconceptions behind will find a very stimulating program of music. Go on a different sort of trip with this one. You will find the ride both fun and musically rich.
Posted by Grego Applegate Edwards at 6:07 AM