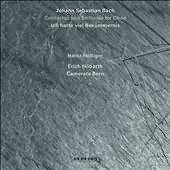 The prospect of Heinz Holliger playing Bach's Concertos and Sinfoniettas for Oboe (ECM New Series) sounded quite promising to me when I heard of its release. After listening a number of times I must say it fully lives up to my expectations. You get ECM's fully resonant acoustics and you get a fully consistent approach to the music, thanks to Holliger's ravishing tone and execution and the sweetly sonorous Camerata Bern, conducted with feeling and exacting attention to detail by Erich Hobarth, who also plays the violin solo part in the Double Concerto for Violin and Oboe.

In addition to the work just mentioned the ensemble takes on a number of the sinfonia introductions that feature the oboe in various cantatas, the sinfonia from the Easter Oratorio and three Bach concertos reconstructed to feature the oboe as the principal soloist. Marcello's Oboe Concerto in D minor, a work Bach apparently admired, rounds out the program.

These are performances that linger over the musical elements with loving care. Holliger's sweetly lyrical approach is complemented by an almost langorous pouring outward in the strings and continuo. This is Bach with less brio and more of a loving familiarity, as one would read a favorite old story out loud to an intimate circle of friends.

It is most certainly not surpassed by any similar recording I've heard over the years. Holliger's long tenure in the limelight has given him a mature profundity that echoes sympathetically in his accompaniment. In every way this is a most satisfying performance, an instrumental centerpiece to anyone's Bach collection.
Posted by Grego Applegate Edwards at 4:56 AM