MC Maguire, Nothing Left to Destroy 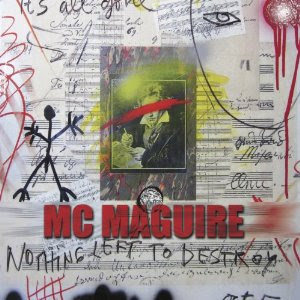 Mixology, MC style, has come of age as an avant art form. It's come quite a distance from the disco days when a dj could get a couple of recordings going in synch and augment one finished production with another, or with the same disc on a second turntable. Not to take away from those days and the subsequent early development. It could be cleverly done. But it wasn't art. Not then. Today you have DJ Spooky and other sophisticated mixologists who aspire and sometimes attain the status of composer, even "serious" composer.

MC Maguire, with the aid of his CPU (read computer) has most assuredly catapulted over the top of dance music to create two full length concertos on Nothing Left to Destroy (Innova 813). It's a melange of collage materials, acoustic, natural, electronic, noise, music as a kind of orchestra pitted against violinist Benjamin Bowman for "The Discofication of the Mongols" and against flautist Douglas Stewart for "S'Wonderful (That the Man I Love Watches Over Me)."

These are madcap juxtipositions of the aural kitchen sink avec soloist. The first piece starts with a "slower" quasi-modal tonal centered violin part and a soundscape that ever-transforms in virtuoso sound manipulation sequences. It gets more and more frenetic as it goes along, more and more there is the CPU orchestra as contrarian, even antagonist to the soloist. It's a fascinating listen.

The piece for flute and CPU bears some relation, now covert, now somewhat overt, to some old pop standards (hence the title). It is busy and turbulent, with the beauty of the flute part making itself known over the trashcan aesthetics of the CPU virtual orchestra.

The music may come out of a DJ stance, but its principal forbear I suppose you could say is John Cage and his live and tape manipulated collage pieces consisting of various prerecorded "found objects"--in his 1950's electronic mix pieces, and in the second phase, with live collaging beginning notably with "Variations IV." But I suppose you could also say John Cage (aided by his often-assistant David Tudor) was the first MC!

What counts in the end is the finished work--the two pieces presented for us on this disk. They are noisy, chaotic, anarchic but not formless. And in their own way they are beautiful.

Recommended for the Gyro Gearloose in everybody. Welcome to the future?
Posted by Grego Applegate Edwards at 4:45 AM