Neil Thornock, "No Stopping, Standing, or Parking:" Music for Saxophones 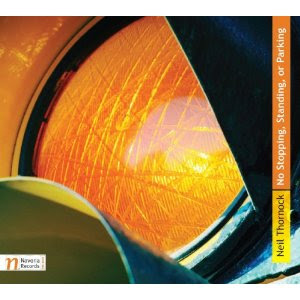 There is no stopping new music. Leaving aside the question of who would want to do that, if we look for it, it is everywhere. It may not get much media coverage. It may not be listened to by millions of teaming throngs of admirers, but it continues on day-after-day, year-after-year, its creators making a living at it in some way if they are to continue, hoping for a time when their music is recognized, or perhaps basking in the limited sort of recognition available to them in the contemporary world.

Today we take a look at another such composer and another such group of performers--all going at it with conviction and perhaps some courage. I speak of Utah composer Neil Thornock and a group of performers that includes the United States Coast Guard Saxophone Quartet (didn't know they had one!). The album is called No Stopping, Standing or Parking (Navona 5861). It's six of Thornock's works, all involving at least one saxophone. There is a piece for solo soprano sax, one for flute and alto, one for alto and harpsichord, one for alto, tenor and piano and two for sax quartet.

Thornock has a tendency to write music that moves along (so the title of the album is quite appropriate) in ways that have to do with the interlocking motion of Balanese Gamelan, certain forms of avant jazz and rock, and minimalism (though here the repetition factor does not play a prominent role in the music and mostly is only present for a moment as a soon-to-be varied or developed motif). Now that movement does not apply especially to the slower movements and passages that are peppered here and there throughout the program. But it does serve to encapsulate the Thornock musical personality on display.

What his music does often do is develop developmental music dialogs that get punctuated by short tutti phrases of a rather emphatic nature. Sometimes there are longer emphatic interactions as well, especially in the pieces for sax quartet.

It is music that is in its own way "in the air." There's a hectic pace of life in much of the post-industrial/industrial world we are in, and art in this case imitates life. That is not to say that Thornock's music is not original. It is. It's driving. It's exhilarating. It charges forth. And it's very well played on this disk.

Recommended.
Posted by Grego Applegate Edwards at 4:40 AM