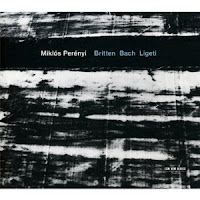 An hour of unaccompanied cello? It could be painful in certain hands or with a lackluster program. Thankfully that is far from the case on Miklos Perenyi's Britten Bach Ligeti
(ECM New Series B0016483-02). That is thanks to the artistry of Maestro Perenyi and the well-conceived, well-paced program.

Benjamin Britten's Third Suite, Opus 87 (1971) starts things off brightly, with a diverse series of bravura virtuosi miniatures that gives full scope to the excellence of Perenyi's artistry without descending to the status of mere showpieces. It also alludes to J. S. Bach at the beginning, so setting the stage for the Suite VI in D Major that follows. The Suites for Unaccompanied Cello are some of Bach's most interesting writing, given the challenge of working around his usual complex contrapuntality through the limitations of what can be done with four strings. Of course the music is extraordinarily memorable and Perenyi's ringing tone and impeccable expressive technique allow the music to stand out as it deserves. Perenyi puts himself into the character of every movement as an actor playing a number of distinct parts in a play: jaunty, contemplative, tender, majestic in turn accordingly.

Ending with Gyorgi Ligeti's Sonata (1948-53) is another solid programmatic move, since the contrast of baroque masterpiece and contemporary masterpiece freshens the ears and heightens attention. This is a short but seemingly difficult piece to play well and Perenyi triumphs by phrasing the whole so that the musical logic does not get distracted by what could be abruptly contrasting changes in articulation and executive mode. He heightens also the double-pronged contrast wrapped into the two short movements of the work: a singing, lyrical quality and an exciting dynamic aspect. To this end he gives forth with a truly gorgeous, clarion tone at times, and an empassioned expressivity at other times.

The hour goes quickly. In the end it is a testament to Miklos Perenyi's fine artistry and a fascinating glimpse into three different takes on the cello alone, an aural centerpiece unveiling the sheer beauty of the instrument in the right hands.
Posted by Grego Applegate Edwards at 5:26 AM