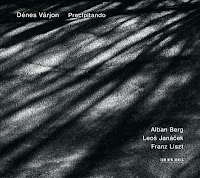 Varjon throws into relief the influence Liszt casts over these two early modernists at the outset of the 20th century--by programming the three together, and by bringing out the advanced and the romantic qualities of the Liszt sonata and doing ths same with the Berg and Janacek works.

All three are handled with spirit and passion. The Janacek certainly sounds more Lisztian than in some of the performances I've heard, and the Berg seems so as well (perhaps as much by being in the context of the others as in its treatment by Varjon).

In the process of listening to this disk you begin to rethink the lineages of the works though the magnetic pull of Varjon's commanding performance of Liszt's sonata. It is masterful. At the same time his heightening of the passionate late romanticism latent or overtly present in the Berg and Janacek gives you a new way to think about the music.

So in that way alone this is an important recording. Commanding Liszt, superlatively empassioned early Berg, and the half-way to modernist Janacek work. There should be no one standard of performance. Varjon's special way with all three works certainly deserves to stand alongside the very best. The recording would have had a slightly different effect if Varjon had ended with a few of the last Liszt piano works, which in other ways point forward. But that is another aspect of the overall trajectory of all three composers. This program not only makes you appreciate, it makes you think. The end was a beginning. The new emerges from the ashes of the old, the old has inherent within it the seeds of the new, the new partakes directly of the old to nourish itself and become the new that is inherent within it. That's something.
Posted by Grego Applegate Edwards at 4:41 AM