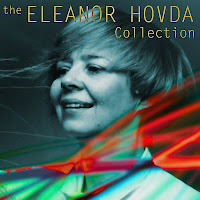 If like me, you have somehow managed largely to miss the music of Eleanor Hovda (1940-2009) you are in for a nice surprise. Innova has amassed a four-CD collection of her music, The Eleanor Hovda Collection (Innova 808), and it is a revelation.

Ms. Hovda has a sense of musical space that at times is a bit East Asian. Like some Chinese, Japanese and Korean traditional classical music, the sound and its wrapping in musically reverberant silence can be integral to the effect. Her attention to the dramatics of sound production also has some Asian qualities. For her, the impact of the music need not reside in the dual contrast quiet/loud, though that can be part of her dynamic. Intensity of sound color versus a more "grey" quiescence, musically italicized articulation version a more everyday "Roman" ordinariness of sound, a more vertical than a horizontal orientation to the sound events, in the sense that there are a series of inter-related occurrences more than a linear narrative, these are a few of the things that set her apart.

Whether it's a matter of a single conventional instrument, an ensemble, an electroacoustic or electronically generated sound source, or a combination of any of these elements, her singular attention to sound sculpturing and the nature of that attention mark her as very much in her own musical world. It's as if you take some of the sheer sensual sound extensions of Crumb's and Cage's piano works and make that a basis, a starting point to go somewhere very much your own. She seems to do that. She also does not in her music draw brackets around "electroacoustic" and "conventional" sound production. She approaches both from a kind of uniformly personal stylistic perspective. All become Hovda.

The four CDs of the set include so much music of interest that I don't think I can easily highlight the high points without over-encumbering this review with too many details. Suffice to say that there is some startlingly singular music generated throughout. It is one vast soundscape in some ways, each piece a part of a larger whole which encompasses all. And that whole reveals a composer we need to hear with concentration.

I believe that The Eleanor Hovda Collection is destined to join the ranks of the most important releases of this decade in the "New Music"/"Avant Classical" categories. It contains some remarkable music. It should go a long way in establishing Ms. Hovda as one of the more important sound artists/composers of our era.
Posted by Grego Applegate Edwards at 4:35 AM