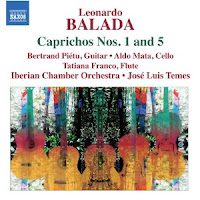 Leonardo Balada (b. 1933) has a sweeping grasp on the music of his native Catalan and often combines it with his own take on classical modernity to forge a strong musical identity. You can hear that clearly and most pleasurably on the new release by the Iberian Chamber Orchestra under Jose Luis Temes (Naxos 8.572625). Caprichos 1 and 5 form the centerpieces of the program.

"Caprichos No. 1" (2003) is a homage to the poet Frederico Garcia Lorca and features Bertrand Pietu on classical Spanish guitar. It has vibrancy, much in the way of folk-dance allusion, a lively solo guitar part and the spicy tang of modern harmonic transformations. "Caprichos No. 5" (2008) honors composer Isaac Albeniz, puts Aldo Mata's cello work into prominence and features well-wrought transformations/resituations of Albeniz's music. The string orchestra parts again have the tang of the present along with a "through the looking glass" treatment of Albeniz themes.

Both works show Balada as the master of string orchestral writing, with brightness and depth coming out of a solo-orchestral dialog more concerned with musical affect and expressive lyric/dynamic modernism than with displays of technical acrobatics, though the players show a beautiful sense of form and dramatics in the performance of their parts.

These are extraordinarily appealing works that show Balada to be in full command of his own voice, characteristically adept at making the old and new his own.

As an added bonus there are two additional works, "A Little Night Music in Harlem" (2006) and "Reflejos" (1988), the latter featuring a solo flute part played with zest and enthusiasm by Tatiana Franco. These pieces continue the modern-meets-local-tradition thematics of the Caprichos.

This is music of immense charm, played with joyful concentration and forceful dynamism by the Iberian Chamber Orchestra and the soloists under the masterful conductorship of Jose Luis Temes. This is a side of Balada that many will find nigh irresistable, I would think.
Posted by Grego Applegate Edwards at 4:50 AM