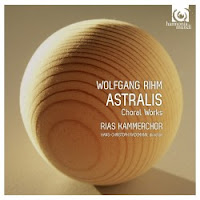 Composer Wolfgang Rihm celebrates his 60th birthday this month. Fittingly a major release devoted to his music, Astralis and Other Choral Works (Harmonia Mundi 902129), has just been released. It shows you in moving fashion the composer's post-high modernist stance, and the influence of early music, a penchant he shares with contemporary composers Part and Gubaidulina, among others. That does not mean that a close listener would mistake his vocal music for the others in a blindfold test. It has its own trajectory, perhaps more linear in its unfolding.

The Astralis release covers three of his mostly acappella choral works: Fragmenta passionis, written when the composer was only 16, Sieben passion-texte, and the 2001 Astralis. All three are performed with care by the RIAS Kammerchor under Hans-Christoph Redemann.

There is a cosmically ambient quality to this music, with less contrapuntal part writing than a slowly unfolding modern-archaic quality, a harmonic sounding of a shifting simultaneity. It's quite beautiful, quite aetherial and a affective experience. Astralis gives you a side of Rihm you will want to appreciate. The sound is excellent and the music on the side of the angels.
Posted by Grego Applegate Edwards at 4:34 AM