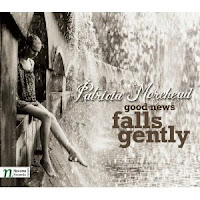 Patricia Morehead composes music that is tonal and lyrical with a touch of Americana meets early-mid Schoenberg. That's perhaps too much of a simplification, and she goes about it all in her own way, but it is the impression I get listening to Good News Falls Gently (Navona 5854), a recent CD devoted to her chamber/chamber orchestral works. There are five of them represented on the disk. All have a particular world to occupy and they do it in memorably pleasing ways.

"Disquieted Souls" for mid-sized chamber ensemble has a fair amount of the lyric Americana side of her work mixed in with some modern melodic architecture. It alternates interestingly a kind of post-Shaker semi-simplicity with a tone-row sort of semi-complexity (though she does not appear to be writing in rigorous 12-tone fashion at any point). Carolyn Hove does the honors on the beautifully wrought solo English Horn part and sounds very good indeed.

"It is Dangerous to Read Newspapers" for soprano and piano is marred by the soprano's rather exaggerated operatic declamation, very dramatic and filled with a rather wide vibrato that does not seem in keeping with the work.

"Ladders of Anxiety" for mixed chamber group and solo flute (played well by Caroline Pittman) brings back the well-conceived mix of lyricism and more-or-less pre-serial modernism. It engages in some interesting contrapuntal interplay, with each separate line having inventive interest yet all blending together well as a cohesive statement.

This is a disk that gives one a good look at a rather little-known composer. I must say that the effect is very good overall and that it made me want to hear more of her work. She writes music that makes full use of wind-string sonarities with a sound as colorful as it is melodically vivid. Bravo.
Posted by Grego Applegate Edwards at 4:42 AM