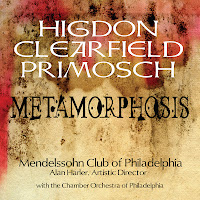 The Mendelssohn Club of Philadelphia, a venerable choral organization, has been concertizing for 138 years. Only in the current tenure of artistic director Alan Harler however have they turned to commissioning new works. My press information informs me that there have been nearly 50 such commissions over the last two decades. Harler and the chorus have teamed with the Chamber Orchestra of Philadelphia to record three recent commissions and the results are now available as Metamorphosis (Innova 806).

They chose three contrasting works by some of the leading lights among Philadelphia composers. Jennifer Higdon's music has gained the most currency of the three, having been the subject of a number of acclaimed recordings and even more performances on the concert scene of late. Her "On the Death of the Righteous" is based on a John Donne sermon. The choral-orchestral writing nicely underscores the mystical-judicial-ecstatic aspects of the sermon's concern with the equality of all righteous beings at the last judgement. There is a rather striking contrast between a somewhat tumultuous orchestral brilliance and the gentle persistence of the block sonorities of the chorus.

Andrea Clearfield's "The Golem Psalms" is almost an oratorio, relating the story of the ill-fated humonculous of Hebrew folklore, his creation, fall and destruction. There is a good bit of choral recitation in an orchestral setting, spiced by the effective narrative part handled well by Sanford Sylvan, baritone. It is a work that largely succeeds in creating dramatic tension and a sense of mystery and foreboding.

James Primosch's "Fire Memory/River Memory" has a more choral/symphonic through-composed quality. The music has a harmonically more adventurous palette and well crafted choral-symphonic sonances. Of the three works, this one has the most sweeping flow to it. It revels in suspension and release, choral part writing that is set off very effectively by poetic orchestration, a solo violin part that weaves in and out of the neo-impressionist orchestral light and shadow. The final of the two movements has some fireworks of an orchestral sort and more of the beautiful choral writing that permeates the work as a whole.

This recording may not set the world on fire, but in the end it is a satisfying look at a marvelous choral organization and three interesting contemporary works. It may not be an essential addition to your library of contemporary music, but for those who favor works of a neo-romantic and beyond quality in the choral-orchestral genre it will be of genuine interest.
Posted by Grego Applegate Edwards at 4:59 AM