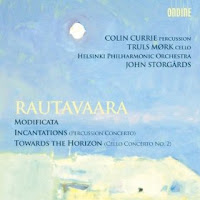 I've come to the music of Rautavaara (b. 1928) only in the last few years. He has a few stylistic periods but there is an overall musical personality that prevails, though I have yet to grasp it fully. I have had the chance to listen with some care to a new release in the last few days that covers with finesse and interpretive sensitivity two later works and one earlier (though recently revised). John Storgards and the Helsinki Philharmonic Orchestra take on Rautavaara's "Modificata" (1957/2003), his Percussion Concerto "Incantations" (2008) and his Cello Concerto No. 2 "Towards the Horizon" (2008-09) (Ondine 1178-2).

"Modificata" has the singing lyricism and rhapsodic sprawl of his later works, only it utilizes a 12-tone row as its principal generating device. It has a northern sensibility, following in part in the footsteps of Sibelius insofar as a skillful and poetic orchestrational ability is quite evident even in the earlier period. The row expands the tonality of necessity, yet it sounds less atonal than it does key-centered and expanded in tonality. The orchestra evokes; the music fills one with a certain wonder. Rautavaara paints in tones, as is clear even then, and one emerges from the work with a feeling of having received a musical revery and reflection that goes beyond the verbal. It's a work of seriously beautiful and moving sounds.

The Cello Concerto No. 2 finds us in more declamatory territory, with soaring phrases that have complex harmonic modernisms yet also have an emotive romantic quality. The cello part, well played by Truls Mork, functions in part as the lead melodic vehicle around which the orchestra responds and converses in lyrically mysterioso ways. Rautavaara the rhapsodist is in full play in this work, yet his way with harmonic density makes the music sound modern.

His other late work on the program, "Incantations," brings a harder edge to the rhapsodism with the wooden tone of marimba and the sharper edged virtuoso drum melodics putting the music into energy-motor territory. The percussion part is no doubt difficult to play well and Colin Currie as the soloist does a great job phrasing the dynamic, ever-transforming part in ultra-musical terms. Despite the more overtly extroverted nature of the work there still pervades a kind of wondrousness to the music that should appeal to many. There is a largoesque middle movement that brings in a more ruminative state, then the finale highlights agitated marimba work and restless strings, impressive drum and cymbal fanfares and fluttering winds. A rather restrained middle section has glowing vibraphone motor candenza passages. Then the full orchestra emerges for a rousing sort of lyrical hardness, recapitulating the thematic material from the first movement.

Rautavaara, early or late, writes orchestral music of a very personal stamp. The three works presented here give us a fascinating glimpse into his development as a musical voice at the beginning and in the later stages of his compositional career. These are impressive and pleasing works. Storgards, the Helsinki Philharmonic and the soloists do the music justice with sonorously impressive readings and enthusiastic verve.

Recommended for both samplers and completists.
Posted by Grego Applegate Edwards at 5:03 AM