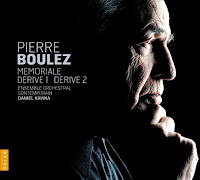 Of all the composers that came into prominence in the second half of the twentieth century, Pierre Boulez remains as central as ever to the original style he helped initiate and develop. He has, perhaps with similarities to Elliot Carter on this side of the pond, sought to realize more and more fully the complex musical language he helped forge, in the process remaining one of its singularly most fluent and eloquent voices. He has not changed his style to suit the passing fancies of later years, but instead has worked and reworked the interlocking complexities he favors to a level that may never be surpassed for sublimity and profound refinement.

A new disk of some of this later works demonstrates this with admirable spirit and clarity. Daniel Kawka and the Ensemble Orchestral Contemporain offer some essential readings of Boulez's "Memoriale" (1985), his "Derive 1" (1984) and "Derive 2" (1988, rev. 2001, 2008). The former works are short, succinct, in some ways preparations for the now 55 minute "Derive 2." And for all the charm and brilliance of the two earlier works, "Derive 2" in Kawka's hands transcends the merely modern to become a thing-in-itself--a dense contrapuntal rush of motion and transformation. Boulez himself made a rather wonderful recording of the two Derives some time ago, but he has not to my knowledge recorded the revised version of the #2. And if anything this piece shines ever more brightly on the Naive (782183) release at hand.

Like Bach's later works, Boulez's "Derive 2" reworks the prexistent (Darmstadt School) style to a point of transcendent brilliance. Mercurial phrases jostle against each other as sectional blocks of the chamber orchestra contribute aurally striking and melodically vital post-tonal parts to the jigsaw puzzle of the whole.

It is certainly one of the master's finest works. Kawka and the Ensemble Orchestral Contemporain emphasize the remarkable plasticity of form and inventiveness of content in a rendition that ought to be one of the primary benchmarks for the work and Boulez's later period in general for many years to come.
Posted by Grego Applegate Edwards at 5:15 AM