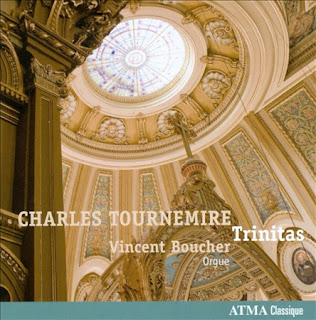 The French Organ School that began with Franck and ended more-or-less with Messiaen is a body of music that established the cathedral organ as an instrument of symphonic proportions and made the freely composed fantasia-like organ style a dynamic, breathing modern art form.

Somewhere in the center of it all is Charles Tournemire (1870-1939), who wrote sprawling masterpieces of freely mystical, cosmic breadth.

A new disk, Trinitas (Atma Classique 2472) of some of his solo organ gems just came out with Vincent Boucher offering a very pleasing program played on a marvelous instrument, with ravishing sound.

Partially because of the nature of the function of the organ in the liturgical setting it has long been an instrument that cultivates great improvisers--from at least Bach's time onwards, and Tournemire's music has that freshly improvised feel. In the hands of Boucher and with the pristine dynamic range and audio depth in this excellent recording, we hear Tournemire in his many-layered complexities, almost as if for the first time.

For all those devotees of the French school, or those new to it, Trinitas is a (pardon the pun) Godsend!
Posted by Grego Applegate Edwards at 5:14 AM