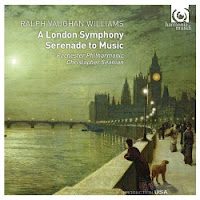 I find that the first version of a classical work that I have heard (assuming that I own it and listen to it successively over the years) is the one that I almost involuntarily use as my benchmark when hearing new versions. That has been true of Ralph Vaughan Williams's A London Symphony (Symphony No. 2) which Christopher Seaman and the Rochester Philharmonic have recorded and now released this month in a program that includes Vaughan Williams' "Serenade to Music" (Harmonia Mundi).

It doesn't matter who did the version I still have on LP, because I am sure it is long out of print (it isn't Boult). What matters is that I heard that version in my head as I first listened to Seaman's/Rochester's new recording. The symphony was first performed in 1914, then was lost and had to be rewritten from memory by the composer, who in the process revised it somewhat. By 1920 the present version was well in hand. I say all of that only because there is a marked contrast between the London and Ralph's First "Sea" Symphony, which was in part more in the romantic, epic mode whereas the London work has budding folk, vernacular and English impressionist elements.

The symphony has programmatic aspects as well, each movement more or less depicting a particular scene at a particular time, or alternately, the passing of the old order in the last movement.

It is a work of quite accessible charm, lyrical homespun unpretentiousness, one of many such Vaughan Williams compositions. The LP version I have long heard has perhaps more of the grandeur latent in the score. Seaman and the Rochester Philharmonic temper that grandeur more with the homespun Vaughan Williams, so perhaps it is a more balanced reading. It is impressive in its overall treatment, but especially so in the lento and scherzo movements. The performance celebrates and marks the end of Seaman's 13 years as Music Director of the Philharmonic; quite appropriately so, one might add.

The disk also contains a rather lovely reading of "Serenade to Music," soloists, choir and orchestra sounding suitably plaintive and stirring in turn.

If you don't have the symphony already this version is a good bet. If you do the treatment of the lento sections will no doubt be welcome. Recommended.
Posted by Grego Applegate Edwards at 4:29 AM