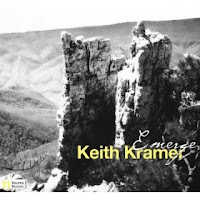 One of the things I like about my music writing is that I get the chance to be exposed to composers and works that I probably would not have gotten to hear in previous years. That means I get a pretty good look at what is emerging today. Keith Kramer's music is a case in point. He composes, plays guitar, conducts and is an audio engineer. The 2-CD anthology of his music, Emerge (Navona 5859) gives you an in-depth look at his compositions, going from solo piano to chamber to orchestral and back to small chamber configurations again.

Kramer writes in a modernist vein, meaning that there is harmonic sophistication of the pan-tonal, advanced tonal sort. I won't say atonal because there seems to be a centered tonality at the basis of the music. At any rate the music sounds rather modern-American at the same time as there are Darmstadt and post-Darmstadt elements. In other words his music does carry with it a synthesis of some of the stylistic tendencies of the last 100 years. However from that a picture of a distinct musical personality emerges. His alternation of turbulence and repose at times stands out; a highly developed melodic-architectural sense does as well.

It's music that takes some time to absorb. It is music that bears the stamp of thoroughgoing high art. Repeated exposure bears distinct rewards. If you are looking to champion a relatively unknown present-day modernist composer, Keith Kramer is one that seems deserving. Listen to this anthology and you'll hear why.
Posted by Grego Applegate Edwards at 4:21 AM