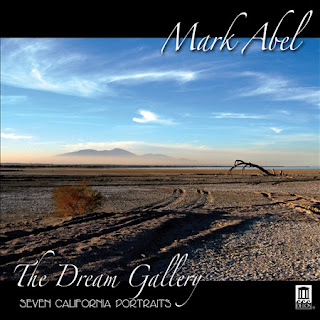 Mark Abel's The Dream Gallery (Delos 3418) has come out on CD. It is subtitled "Seven California Portraits," and that involves a "libretto" text centered around the stories of seven separate individual personalities from different regions and socio-economic strata of present-day California. Each person takes the "stage" one by one in seven movements for vocal soloists and orchestra, and tells of his or her life and general disenchantment with it.

The text has the people sing about their disappointments, emptinesses, losses and dilemmas in a local America that has not lived up to their expectations. In that it is a musical story of the recession, and one of the only concert pieces I can think of that takes on this period of our history at this juncture. That it does so from the standpoint of seven sometimes rather confused average-Joe types is I suppose what makes it so engagingly immediate. The music has a kind of "high-toned" symphonic quality, in some ways a transformation of the Broadway musical to concert music. It's contemporary in a mostly diatonic, post-minimalist way, with some rather excellent tone-painting settings of texts--something that Benjamin Britten did so well--along with a hint of Steve Reich's minimalism, a Zappa-like flourish now and again, not to mention Michael Nyman's and John Adams's operatic treatments as predecessors. It is that I hear more than a rock-symphonic synthesis per se.

I only mention this because the CD cover goes on a bit about how, finally, here we have a successful amalgam of rock and concert music. Frank Zappa did that in a number of works that deserve to be more widely heard. Mark Abel does not, really. I hear little to no rock, unless one uses that word to determine a category of music that does not include jazz, country, rap or classical. There's something perhaps of the singer-songwriter's craft here, the post folkie phase--and the modern art song that came out it, without the verse-chorus structure but instead with a contemporary operatic horizontality, if you will. Other than an occasional momentary illusion to rock, I don't hear the connection, unless it be with the most symphonic aspects of progressive rock, which were more symphonic than they were rock to begin with. In the end all that does not matter.

It does not matter because the music is compositionally/orchestrally strong and well-performed. It involves some very accessible, serious symphonic song crafting, a contemporary opera without costumes and props. The music appeals. The texts have their charm, but what should be hard-hitting sometimes seems self-indulgent. One young lady sings about how the Baby Boomer generation developed cosmic consciousness while they let the planet fall apart. And, she goes on, if you think we're going to continue to support social security, "fat chance." I found that offensive and a little too pat, not to mention a bit redolent of what the extreme right would have us believe. Blame everything on the hippies (among others) and get rid of the social programs so we can recreate the world of robber barons, with an ever enlarging gap between the haves and the have-nots. Well of course this is supposed to be a series of real-life slices of life, and I am sure there are those out there who think that way. I won't comment further. Nevertheless I don't appreciate the intrusion of far right-wing politics into my art-music listening, even if it is supposed to represent a California (stereo)type. It doesn't come off as parody. It is deadpan. So be it. Otherwise the stories can be quite moving at times, with their well-conceived musical settings.

Nonetheless Mark Abel has crafted a thoroughly contemporary, excellently written work that is a joy to hear. The soloists and orchestra do a terrific job with the score, and no doubt it could be considered a triumph.
Posted by Grego Applegate Edwards at 5:24 AM