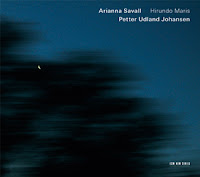 Arianna Savall made a reputation as the vibrant singer with the early music ensemble led by Rolf Lislevand, on Nuove musiche. She teams with Petter Udland Johansen for the album Hirundo Maris (ECM New Series B0016978-02). The title means "sea swallow." Savall and Johansen conceived of the album as a kind of musical journey from the Mediterranean to the North Sea, in a series of old chestnuts and original songs that run between folk and early music in engaging ways.

It's a fascinating ensemble combining the vocals and folk harps of Savall, Johansen's vocals, fiddle and mandolin, and three additional ensemble members who variously sing and play guitar, Dobro, double-bass and percussion.

You get a rather marvelous collection of songs, beautifully performed. Aside from the originals there are traditional Sephardic songs, Catalan songs, Norwegian folk, the Scottish song "the Water is Wide," and others, all done in more or less early music troubadour style with a small string ensemble conceived in traditional yet also innovative ways. There are touches of ethnic percussion as it appeared on the crossroads of cultures at the edges and there is an overall luminous ambiance to it all, as you might expect from an ECM recording.

It's very lovely music, timeless and timely, performed with style and feeling. Arianna's voice is quite terrific and Petter has a pleasing voice as well. They blend together in harmony or strike off on their own from song to song for plenty of contrast.

A beautiful album that I recommend highly.