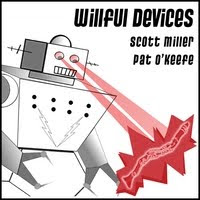 We reviewed something by Scott Miller several days ago here (see index). Today, another. It's Scott on computer-interactive live electro-acoustics and Pat O'Keefe on clarinet, for a CD called Willful Devices (self-released).

The finished product is a series of compositions by Miller utilizing interactive electronics, and improvisations, both structured (frameworks composed by both artists, respectively) and free.

The title sums up the idea that computer interactive programs often have a will of their own in the way that they respond to sound-music stimuli. They here become a third variable, a third creative force in the generation of musical results.

The pieces have an overall ambiance and sound staging so that the improvisational, the composed and the computer derived aspects of the aleatory all run together in a continuum.

Music from Minnesota is what you might call it. But of course not just any old music. Pat O'Keefe is a most adventurous player, fleet and very attentive to the sound color possibilities of the clarinet, be it conventional tone, harmonics or expressive phrasing. Scott Miller creates an electronic orchestra of sorts; but not a sonic equivalent of a conventional orchestra as much as a wide but related spectrum of electronic tones and colors that blend together and with the clarinet and its electronic alteration in totalized ways. His sonic palette reminds at times of the classic electronic phase of Stockhausen, not in sound-structure per se so much as total impact.

This is high adventure avant garde music of the best sort. It is sonically advanced, musically intricate and most pleasing in an avant sort of way. Recommended.