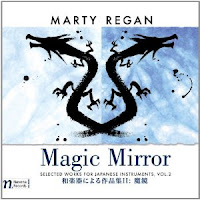 The "East meets West" idea has been with us for ages, of course, but in music it is not the norm. A real interpenetration of musical cultures is not always an everyday happenstance. And of course there are degrees of success in the music making situation, as there are processes of exchange between musical cultures that can happen over long periods of time.

The music of Marty Regan is something special because he achieves a most interesting synthesis and gives us some very enjoyable music at the same time. His second volume of "Selected Works for Japanese Instruments" is out. (I covered the first volume, Forest Whispers, on my Gapplegate Guitar blog on October 14, 2010.) Magic Mirror (Navona 5876) in many ways begins where the first volume left off.

It's music that uses traditional Japanese instruments like the shakuhachi, shamisen, koto, biwa lute, etc., for a music that has much of Japanese tradition built into it, but also has personal compositional ideas and juxtapositions that have a Western heritage. The most obvious place you'll hear that is with the piece for four shakuhachi, "Flamefox," or the piece for shakuhachi and string quartet, "Voyage." In both works Western harmonies and avant/traditional Western classical elements freely intertwine with Japanese musical sensibility.

That's true to some extent throughout the album. And it can be quite subtle, for example with the interjection of long-toned Gagaku sounds with other elements on the title cut.

It's another worthwhile effort from Maestro Regan, a very enjoyable, substantial musical repast. Regan gives us innovative writing that seeks to discover new relations between and within traditions. It succeeds!