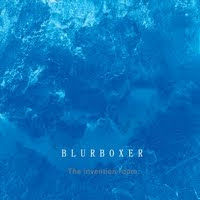 Each piece has composed and seemingly spontaneous elements. In many ways the artists use the studio setting as their canvas. The end result is inseparable from the way the music is mixed, balanced and processed into recorded sound. Contrabass, sometimes sitar and wind soloists tend to play structured motifs much of the time and electronic loops and timbres give the sound a grounding and a flow. Like conventional minimalism, there can be repetition. But Blurboxer tends towards phases and sound structures untypical of composers working in that style.

And perhaps that is what especially interests me. The form is usually not unfamiliar but the music itself, the notes and the overall ambiance is unexpected. For that reason it took me several listens to get a grasp of what I was hearing.

It is different, in other words, rather original, avant but pretty much accessible to anyone. Blurboxer. A new, worthy electro-acoustic environment for your ears. . .