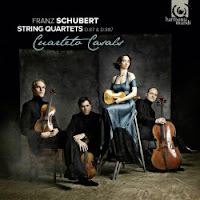 In life you cannot go back. We all know that, like it or not. But in music, you can. Take for example Schubert's String Quartets. We can re-experience them any time. We can hear the old recordings that first inspired us. And we can hear new recordings, some of them so fresh, so regenerative that we experience the works anew, go back to a more primal Schubert, get to know him on a different level.

That's the feeling I get listening to Cuarteto Casals's recording of Schubert's Quartets D87 (no. 10) and D887 (no. 15) (Harmonia Mundi). It's a Schubert that speaks more directly to us, unclouded by the accumulated years of Romantic string techniques, by excessive vibrato, by a certain faux gush that recordings mostly all had of this period of music when I was growing up.

Cuarteto Casals ditches the schmaltz and instead articulates the quartets with a wealth of attacks, a legato that sings without weeping, a brio that is infectious, a vibrato that appears at appropriate points only, crescendos and swells that make logical and emotional sense for today, and perhaps are closer to Schubert's conception as well.

The D87 was written when Schubert was only 16, amazing in itself given the full development to be heard in the work. In Cuarteto Casals's hands you truly can feel the influence of Austrian folk idioms, the beauty of its lyrical directness.

The D887 on the other hand is deep, long form Schubert, his last quartet. It has a majesty and a labyrinthan quality that could only come from the pen of the fully developed composer at his peak. Cuarteto Casals comes through again with a beautiful articulation and differentiation, a heroic quality that the work surely embodies.

This recording is a triumph, a masterful performance of beautiful music. It ranks in my mind with what Colin Davis did with the string section for an Elgar symphony when he visited New York some years ago. He, like Cuarteto Casals, made you hear the work anew with a detailed articulation of every phrase.

It's Schubert like he was meant to be heard. Ravishingly so.

Posted by Grego Applegate Edwards at 4:13 AM