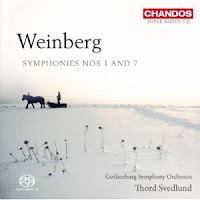 To finish off the week, another disc of Mieczyslaw Weinberg symphonies, this time Nos. 1 & 7 (Chandos). It's once again Thor Svedlund conducting--the Gothenburg Symphony Orchestra for one, The National Orchestra of Sweden for the other.

Weinberg continues to impress and interest me. He was a Polish Jew that came to Russia and made his career there, and you can hear in his music a little of all three cultures--but primarily as a symphonist it is his distinctive compositional personality that prevails.

The No. 1 has a marvelous opening movement with a kind of endlessly permutating melody. The symphony sounds fully mature, almost a Polish-Jewish-Russian Sibelius-Mahler with more dissonance. He modulates in interesting, sometimes abrupt ways, similar to Prokofiev in this period. The fourth movement is contrapuntal and bold, filled with excitement. The work has much charm and is decidedly no student work. It's fully mature Weinberg.

No. 7 is unusual in that it has a prominent part for harpsichord, which Erik Risberg handles adroitly. The symphony is a bit more on the moody side, sometimes agitated, with moments where a folk-dance element intervenes in effective ways, especially in the long final movement, where there is some forceful, madly insistent motives that take those elements and give them an almost brutally modern slant. It's great listening. And it is another masterful work.

Svedlund's Weinberg cycle is marvelously done from what I have heard at this point. And judging by what I have experienced of the composer's work thus far, Weinberg is a major symphonist. This volume features two excellent examples, played with great spirit. Listen to this disk and I think you'll find much to savor.