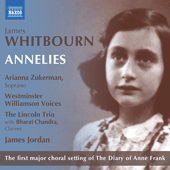 Yesterday was Remembrance Day, the day we recall and honor in sorrow the victims of the Holocaust, the anniversary of the liberation of the Auschwitz death camp in 1945. Surely there is hardly a more moving and poetic depiction of innocence in the hands of that evil than the Diaries of Anne Frank.

It is fitting then that composer James Whitbourn has used the diaries as the basis for a major choral work, Annelies (Naxos 8.573070), a recording of which is just now being issued in the States.

Before I heard it I was, to be honest, slightly wary of this kind of project. It's so easy to get it wrong, to go off-center on the impact of bravery and youthful steadfastness in the face of darkness and brutality.

James Whitbourn gets it right. There's no one way with this narrative, of course. Still nothing superficial will do. He takes a ponderously sorrowful approach here and, in the end, a bleakly comforting, musically moving transcendance. A remembrance that avows, "this will not stand!" And that seems fitting.

The performance is exceptional. James Jordan directs, Arianna Zukerman does her part justice as the soprano soloist, the Westminster Williamson Voices and the Lincoln Trio with Bharat Chandra on clarinet all come through with expressive eloquence.

The music is straightforward post/neo-romantic modern in a tonal mode. And it does not attempt to create a largeness as much as a literal intimacy in keeping with the solitary, cloaked-hidden advent of the events Anne Frank underwent. And that works very well.

It is marvelously done, a choral masterwork of our times I would suggest. The ending represents such tragedy in such a beautiful way I found the tears coming to my eyes.

We emerge from one of the darkest centuries the contemporary world has known. We face fresh darknesses. Annelies reminds us touchingly and very musically how our difficulties pale in comparison to Anne and her fellow victims. If you can get only one choral work this month or even this year, think seriously about this one.