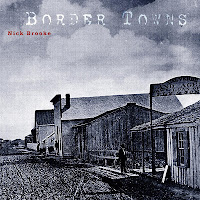 Composer/sound artist Nick Brooke started the long work Border Towns (Innova 826) as a mash-up of Americana, music of the heartlands, centers vanished or vanishing. But then he became fascinated with the border towns of America and how they work at a distance in ways that centers do not. He visited a number of such towns, collecting on-site radio station broadcast samples and other local sounds. This and the aggregated Americana collage fragments he had been thinking of became the ultimate basis for the final version of Border Towns, a montage in the most post-modern sense, of cowboy songs, Indian chants, folk songs, pop tunes of yesterday and the day before, opera, hoary Led Zeppelin, Aaron Copland, generally music of time, genres and cultures peripheral to the sometimes bluntly functional centers of today. So you wont hear the latest hip-hop hit or something equally central and temporally in the now.

From "The Times They Are A Changing" to the National Anthem (Hendrix version or otherwise) there is a vast panorama of musical snippets fitted together to become a different work, a kind of border composition that makes use of the semantic spaces between the abrupt cuts and mixes to make a musical tapestry that is both a sum of the parts and much much more than that. It's a music of shreds and patches, a bricoleur's dream, and new music that is old music in pieces. It represents border towns that mesh many overlapping cultures and historical castaways...in ways so different from the center.

The final work is like a new evolvement of Cage's Variations IV, which was a more or less random accumulation of recorded sounds, environmental sounds and so on compiled live by Cage and David Tudor. The important difference between that work and Border Towns, aside from the more through composed aspect of the latter, is that in Border Towns every sound fragment is motivated by its meaning--as a part of the border, a part of Americana as we experience it today.

There is a performance group of vocalists and instrumentalists that enact the snippets, singly and collectively. Taken in junction with the radio samples, the snippets amalgamate into a work of many voices but most satisfyingly, a work that gains a wholeness that Variations IV was never meant to achieve. For it all to connect semantically with listeners the work must have some immediately identifiable fragments of songs to make its point, and it does have that. But it becomes most remarkable when the fragments blend together to create new music altogether, where you no longer hear the snippets as fragments, but as a whole, unified work that proceeds from A to B like a conventionally composed piece.

It's remarkable music. It can irritate if you are not in the mood. But put yourself in the proper frame and it provides excellent listening. This truly is "New Music," and it truly is "Old Music." Like the border towns it encapsulates, it is something much more, it points to the border status we all feel in the digital age, to the internet and its meaningless hodgepodge of random signals, of the internet's chaos of random information and its capability to decenter us all.

Listen to this one and ponder. And enjoy.