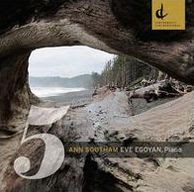 Canadian composer Ann Southam passed away in November 2010. Five completed piano pieces were found in her home in manuscript. It is these works that form the subject of the new CD 5 (Centrediscs 19113). Pianist Eve Egoyan gives us her sympathetic readings of the works, which are "Returnings II in B flat," "Returnings in A flat," and three untitled works, in G, A flat and B flat, respectively.

The works are similar, as I understand it, to the Returnings pieces published in her lifetime.

Each one is of a piece, at a leisurely pace, legato, unfolding slowly and hypnotically. They are of a mesmerizing minimalist sort. A chord, a note in the bass and several notes in the mid-range, for example, alternate slowly; perhaps several additional chords are introduced later. Each work proceeds in a similar manner for around 15 minutes.

Every piece is a distinct part of the overall set, like Carl Andre's tile works were each a part of a series, yet differed slightly.

It is a minimalism genetically related to Satie and Cage but ultimately all Southam's own. The music whiles its way into your life in a sort of impressionistic manner, like the babbling of a nearby brook.

I took to the works right away and find them continually welcome in my listening life thus far. Southam is like no other and that these are in effect her goodbye to us on this earth is quite affecting.