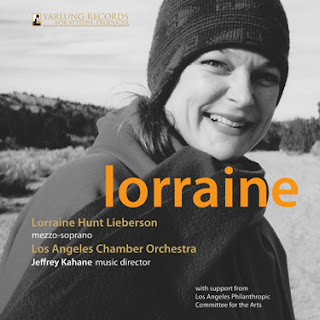 Mezzo-Soprano Lorraine Hunt Lieberson left us early, mid-last decade, a victim of cancer. As with any artist of her stature there is no replacing her. But at least there are her recordings.

A new one has surfaced, with her singing Bach's cantata Mein Herze schwimmt im Blut, BWV 199, live in 2003 with the Los Angeles Chamber Orchestra under Jeffrey Kahane. The CD is simply titled Lorraine (Yarlung 96298).

What to say? Lorraine sounds unearthly, the Bach cantata is very moving and beautiful, the oboe de amore part nicely played by Allan Vogel, the viola solo likewise by Roland Kato. It is toward the end of Lorraine's life, in effect a kind of goodbye, though I don't imagine she was thinking of us here in 2013 as she sung. But here we are anyway.

The orchestra does an extraordinarily quicktime version of the Brandenberg No. 4 by way of introduction. It's taken at a faster clip than I've ever heard and as a result Margaret Batjer's solo violin part is a pyrotechnical feat of large proportions. It's exhilarating and a testament to the spirit and accuracy of the orchestra.

But the disk belongs in the end to Lorraine. Her artistry is ravishing.

Posted by Grego Applegate Edwards at 5:56 AM