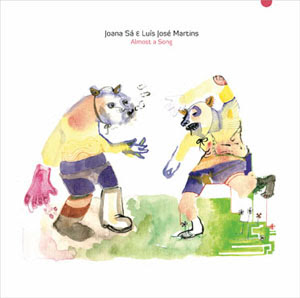 Joana Sa put out a very absorbing CD/DVD Through the Looking Glass some time ago. I reviewed it on these pages (see 9/27/2011 posting) and found myself intrigued with the prepared piano composition/improvisation that the recording contained.

She is back, this time in a collaboration with Luis Jose Martins they titled Almost A Song (ShhPuma 004). Ms. Sa is again on piano, and also toy piano, celesta, miscellaneous instruments and electronics. Luis contributes his vivid classical guitar approach, plus percussion and electronics.

Joana's first album had a Cage-through-Stockhausen influence, within which she did some very creative work, following a path that ultimately led away from an avant orthodoxy (since everything established in time becomes an orthodoxy).

The new album finds Joana and Luis staking out territory that is a bit more "post-modern," presenting a series of improv-compositions that have avant jazz and minimalist reference points, very much in their own way.

This is music operating at a high level of abstraction and interest. It is yet another compelling recent example of the avant jazz-new music nexus. The artists generally set up motival structures that they work through and vary as improv performances. Each piece has its own sound world, from dreamy-surreal to extroverted-impactful.

Much of the music uses repetition and sonic structure forms as building blocks that then develop in loose, fascinating ways. It's marvelously mysterioso at times, bracingly invigoration at other times.

Once you've heard this album more than once, you do not forget the music. It has originality and imagination, a haunting sensitivity toward mood creation and world-encompassing sound-painting.

It's the sort of disk I would be inclined to put on for people to hear if they ask me "what's new and good," assuming they have had their ears prepared by modern jazz and classical previously.