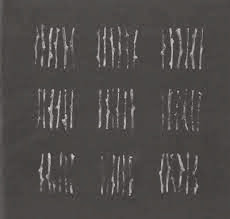 Alvin Lucier somehow manages to come up with compositions that have such a personal singleness of purpose that they may exasperate you at first. But the more you listen, the more you cannot forget them. You even at the end like them, or I usually do, but as part of a process. I remember buying his two-LP set years ago, Music On A Long Thin Wire. I was not a very patient person then. Life was something I had to "do" at that point, the more quickly, the better. That music was oh, so slowly moving that I could not at that time bear it. Only later, in fact only in the last 10 years when it was available on CD did I come to appreciate it a great deal.

Now I am not saying that you are going to feel the same way about the group Decibel's performance of four Lucier works, on the CD Still and Moving Lines (Pogus 21072-2). I don't think exasperation will be your reaction, even the first time out. In fact you may well find the works more readily accessible like I did. That may have something to do with the very sympathetic reading that Decibel gives them. They are a Perth, Australia based new music ensemble that favors works that combine acoustic instruments, electronics and the incorporation of the environment into performances. And it just so happens that the four Lucier works do all of that in varying degrees.

Perhaps the more difficult work is "Shelter" (1967) for vibration pickups, amplification system and enclosed space. They use the auditorium of an Australian music conservatory, placing pickups on walls, doors, etc., that receive everyday, typical sound vibrations coming from outside the auditorium and then generate the external-internal filtering and amplification of those sounds into the auditorium via loudspeakers. This is an example of Lucier's more experimental period and the sounds are fascinating but do take some getting used to.

On the other hand, his "Ever Present" (2002) for flute, saxophone and piano with slow sweep pure wave oscillator is much more readily grasped. The combination of instrumental parts and the ever changing pitch of the oscillator has a somewhat more conventional "new music" sound to it and it is masterfully performed.

"Hands" (1994) and "Carbon Copies" (1989) are somewhere in between the two extremes, but generally have that sustained performative rigor (and vigor) that define the best of instrumental Lucier.

It is surely something to do with the talent and sensitivity of Decibel that these works are so communicative. But of course, again, these are some excellent Lucier works covering a wide span of time.

If you want to experience Alvin Lucier and why he remains so central and vibrant to the new music scene, this is a great place to start. It definitely is up among his very best.