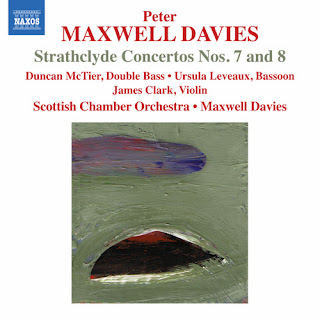 The full scope and dimension of Peter Maxwell Davies (b 1934) was unknown to me until I began sampling and appreciating the Naxos ambitious series of issues and reissues devoted to the composer's output. I now see his importance in the English modernist scheme of things, whereas before I only knew him as a performer of a few select vocal works.

Today we have another, a new reissue in the series, covering his Strathclyde Concertos Nos. 7 & 8 (Naxos 8.572355) which are scored for a chamber orchestra with the soloists being double bass and bassoon, respectively. The soloists, who do a fine job, are Duncan McTier on the double bass and Ursula Leveaux on the bassoon. The works were written in 1992 and 1993.

Previously I covered here Nos. 3 & 4 (see August 2, 2013), which I liked quite well. These are as well-crafted as the earlier ones, but for some reason took me more listens to get acclimated. Part of that no doubt had to do with the lower-ranged sonorities that the solo instruments belong to, the other aspect is that often Maxwell Davies scores the chamber orchestra part with more of a lower-range emphasis as well. So you hear the sort of Maxwell-Davidian hard-edged modernist flourish that you did in the earlier concertos but it sounds less brilliant in sonority. No doubt because of that the appreciation for me took a bit more time.

There is a bonus work with a Scottish folk aspect, "A Spell for Green Corn, The MacDonald Dances" (1993), which is a most pleasing, rather light-hearted work. The solo part is played by James Clark on violin. It makes a nicely bright ending to the program.

As the other concerto disk this one was previous released by Collins Classics in the '90s. If you want to start with one, the recording of 3 & 4 may be the more obvious choice, unless for whatever reason you would rather hear the bassoon and double bass, which are of course the more unusual protagonists in such a matchup. Or get both! Certainly you will be treated to a side of Maxwell Davies that gives as much reward back as your attentive listening puts in. Thank you Naxos for releasing this!