Voices of the Earth and Air, Works for Chorus 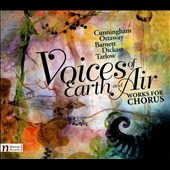 There is music, we all know, that just by virtue of being sung properly, with lyrics that you can relate to, take on a different dimension than the instrumental equivalent. With chorus that can be especially so, since the collective aggregate gives a very human dimension to things.

That's what I've been thinking as I have been listening to the multi-composer, multi-chorus anthology of new works, Voices of the Earth and Air (Navona 5923).

Five composers of today contribute works. Six choruses divide the singing duties. Some of them are enthusiastic amateur groups, some are better known and I can only assume make some kind of a living doing this. Not all of the works are necessarily the definitive versions I can only assume, but these seem to be premiere recordings for the most part, so that's only natural.

The composers are not well-known in the general sense. All have a good sense of choral possibilities, whether they work in a kind of post-modern mode, flirt with modernism, or flirt with the vernacular (blues for example), or stay close to basic song form. They are Michael G. Cunningham, Alexandra Ottaway, Carol Barnette, David Dickau, and Karen A. Tarlow.

Some works are a capella, some performed with piano and/or other instruments.

Michael G. Cunningham I found the most convincing, especially his four-song "Posies" and and the nine-song "Yeats Madrigals". The music and the Kuhn Mixed Choir sound especially well.

So this is a lot of choral music. I found all of it worth hearing, but particularly the works by Cunningham. There are a couple of songs of winter, snow and the fact that it does pass. But this music is good for any season.