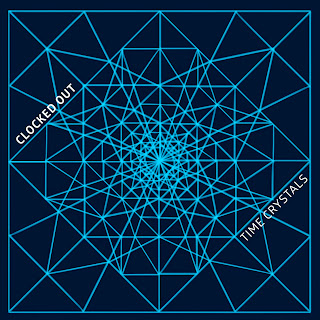 Today we have something a bit unusual. It is the duet of Erik Griswold on prepared piano and Vanessa Tomlinson on percussion, who go under the name Clocked Out. On their album Time Crystals (Innova 908) they engage in a series of 13 short Griswold compositions that represent in musical form physicist Frank Wilczek's idea of Time Crystals, which in the liner notes is defined as "perpetually moving structures that repeat periodically in the fourth dimension."

Griswold on prepared-unprepared piano and Vanessa Tomlinson on all manner of mallets and other pitched and unpitched percussion explore rhythmic and sonic possibilities that can be ornate but deep-down have an immediacy, a homespun elemental quality. It all in part comes out of the tonality of their forebears Satie, Cage and a bit of ostinato that extends minimalism by going outside of its orbit, sometimes approaching the directness of rock without the heaviness. It is rather buoyant instead.

It is music serious but whimsical, folk-some and sometimes a bit ritualistic. It is charming music that should appeal to a wide spectrum of listeners, yet there is nothing tossed off about it so much as it develops ideas well, has its brief say and moves to the next number. By so doing it covers a good deal of ground while maintaining a stylistic consistency.

This is music that is easy to like. If you want something refreshing, you can surely find it here.