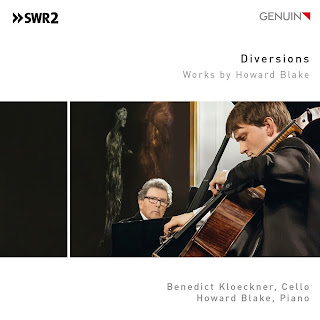 An English composer with a pronounced lyrical gift, Howard Blake (b. 1938) is perhaps best known for his soundtrack to the feature cartoon, "The Snowman," which has a hauntingly beautiful refrain "Walking in the Air" for boy soprano and orchestra. He has a body of more "serious" works though, and we can hear some of how that sounds on a new recording featuring works for cello and piano, Diversions (SWR2/Genuin 15346). Benedict Kloeckner takes on the cello role for these works and sounds terrific. Howard Blake himself handles the piano part with dramatic credibility.

These are modern lyric pieces that show us Blake the gritty but mellifluous contemporary composer in a series of six compositions, all but one enjoying world premier recordings in the versions presented. This is music of a pronounced tonality but without anything in the way of a neo-classical glance at the past. He may certainly have something of the romantic in him, but like Samuel Barber it is so individual that you don't find yourself saying, "yes, that is Brahmsian...that is Mendelssohnian, etc." The works hold their own as contemporary music with a pronounced Blakean signature affixed. There is nothing banally "new age" sounding to them either. The music is filled with inventive flourishes that evince a fertile creative mind at work.

The piano parts occasionally step into the spotlight but mostly this is music that gives the cellist a chance to take a singing melodic lead. Kloeckner responds with an extraordinarily vibrant tone and rhapsodic lucidity.

There is nothing in the way of filler. Each work has something to say. We get a touching rendition of "Walking in the Air" that reminds us how well-constructed the deceptively straightforward song is. But then we get more complexly lyrical works in the title work "Diversions for Cello & Piano," in "Pennillion for Cello & Piano," the "Cello Sonata," and "The Enchantment of Venus." The program concludes with a short and very lovely "Archangel's Lullaby" and we are done.

This is music any classical Anglophile will appreciate. It has an accessibility that will appeal to a large audience, potentially. And it is rousingly good music. It is not high modernist but it is thoroughly contemporary. It has a special quality to it that belongs very much to the musical personality of Howard Blake.