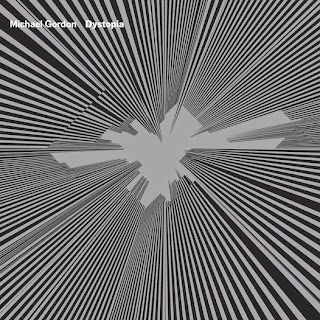 The state-of-the-art as seen in the latest orchestral music of our time? Can we say something general about it? We can try. It tends to be dense, beyond minimalism. Perhaps there is a synthesis afoot between the new tonality and the lessons learned from the modernists? It depends of course on where you look.

All that tends to apply to Michael Gordon on his latest album. It features two new orchestral works and is titled after the first, Dystopia (Cantaloupe 21105).

Both works in their own way partake of the largesse of the grand symphonic tradition in that they are ambitious, long and very dynamic works with their own flourish. Both have tonal and extra-tonal elements. Both are dense, ever-mutating collages in sound.

"Dystopia" is the longer of the two, with what sounds like a pretty large orchestra, the Los Angeles Philharmonic under David Robertson. The aim is to capture the essence of Los Angeles, as if one were speeding through it on the freeway at 90 miles per hour. We get a huge cacophony, the sound of glissandi representing a record speeding up and slowing down, with compositional elements that range from Ockeghem to drum-and-bass pentatonic riffs. It is a vast maelstrom of sound that reminds slightly of Charles Ives's last symphony in its thickness and chaos, yet holds its own with distinction and power. The performance is excellent.

For the second work Gordon looks to Beethoven's Seventh Symphony for inspiration and commemoration. "Rewriting Beethoven's Seventh Symphony" is the result, played here by the Bamberger Symphoniker under Jonathan Nott. For each analogous movement Gordon has chosen a number of motives from the original, filtered and re-presented in another collage that varies in density but throughout remains multi-thematic and polytonal, multi-dimensional and cacophonous. It is perhaps the slightest bit less daring than "Dystopia" but no less interesting. One's familiarity with Beethoven's Seventh does allow for a bit more recognition of Gordon's compositional transformations at times and for that it should give listeners an insight into Gordon's operational methods. Again, performances are very good. Both works benefit from clear and well-staged audio.

In all Michael Gordon gives us two bold new works that may indeed represent a part of the state-of-the-art today. This is music that must be heard. It is not something to play in the background. Its complexities will allow for extended repeated listenings--and in fact demands them. It all shows us an important composer of today at his best.

Essential listening for the new modernism-and-beyond.