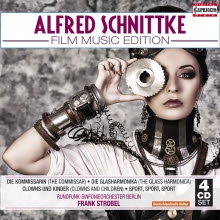 Russian composer Alfred Schnittke (1934-1998) was extraordinarily accomplished, increasing polystylistic, and unpredictable. He left behind him a body of works that have still not been fully explored in new music circles and among serious listeners.

Many will know that he found employment composing film soundtracks, for example, but few in the world at large have had the chance to familiarize themselves with any of them. The opportunity for that is very much here in the comprehensive four-CD set Film Music Edition (Capriccio C7196), with orchestral suites based on soundtracks for ten films, performed well by the Rundfunk Sinfonieorchester Berlin under Frank Strobel.

It is treasure trove of orchestral music occupying a stylistic universe so diverse as to surprise often and nicely. We hear everything from neo-classical to rock-influenced to neo-romantic, ultra-modern and contemporary anthemic (i.e., memorable yet tied to the mood of a film).

There is so much worthy music to absorb on these four CDs that I still have some ways to go to a full assimilation of it all. I need more time which I will gladly give this music in the weeks to come. The box set gives you a Schnittke both fully original yet harnessed to the particular needs of any given film. To his credit the music is never perfunctory. There is consistency in the realization of high standards of craft and inspiration. It shows the creative brilliance of the composer while it no doubt furnishes highly effective music to fit each film.

If you do not know Schittke as yet, you should. This is not the place to start, however, unless you want to approach his music from the outside in. His quartets and symphonies otherwise would be the best place to begin. Nevertheless this is music to complete the picture of Schnittke as composer-in-the-world. It is invariably fascinating music, a revelation to all who think they know Schittke fully. Very recommended!