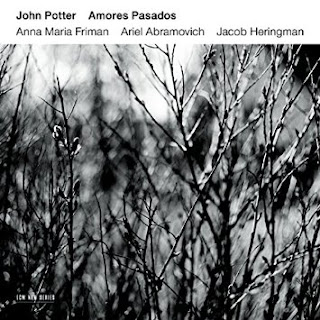 John Potter, the tenor of the now defunct but well-acclaimed Hilliard Ensemble, steps out with a winning solo effort, Amores Pasados (ECM 2441 B0023445-02). For the album John had the great idea of looking at the divide between art song and popular song, a modern development, by performing folk-oriented songs by composers from early times to the present and by performing art songs by three rock songwriters, John Paul Jones (Led Zeppelin), Tony Banks (keyboardist from Genesis) and Sting.

So we get a very varied cornucopia of song, performed in early music folkish style by John Potter, Anna Maria Friman on vocals and hardanger fiddle, with Ariel Abramovich and Jacob Heringman on lutes.

What amazes is how all the songs from such diverse times and places work together in a program where the present and the past commingle together artfully, glowingly.

All flows beautifully together with Potter's vocals and those of Ms. Friman standing out with sensitive artfulness, the lute and fiddle parts giving us an early music feel yet of course the melodic structures differing by period. Nevertheless one finds the music unified by the instrumentation and vocal presence, as if one were looking into the future from the perspective of a Renaissance performing troupe.

It all is rather uncanny. Potter is outstanding as are the others in creating and sustaining a timeless mood, somehow mysteriously partaking of ages long gone and of the very near present. The sound has that ECM touch, so fitting for this music, and the performances are in every way worthy of the songs and their consistently high quality.

Given half a chance, John Potter and ensemble will put you under their spell and give you much pleasure with this fine album.