Louis Babin, Saint-Exupery and Other Works 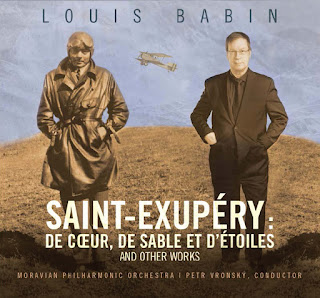 Saint-Exupery was a French writer, poet and pioneering aviator. His novel masterpiece The Little Prince appeared in 1943 at the same time as he was serving as a pilot in the French Air Squadron in North Africa. He flew on a mission over Occupied France and never returned, presumed dead.

These are descriptively modern tonal pieces that cover some considerable terrain with a post-romantic sensibility and a varied palette of orchestral colors. There is much to appreciate, vivid music from a Canadian composer who is perhaps not as well known outside his home country as he deserves. Saint-Exupery gives us three exemplary works that serve as a good introduction to Louis Babin. Listen and enjoy.