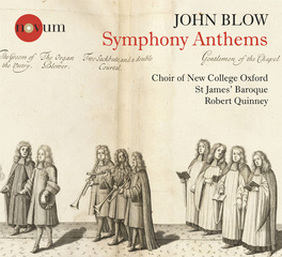 In England's baroque era John Blow (d. 1708) was one of the most admired and renowned composers. Purcell was his pupil. 300 years later we remember and perform Purcell's music; John Blow does not get all that much attention.

Listening to the fine performances of the Choir of New College Oxford and St James' Baroque under Robert Quinney doing six Blow Symphonic Anthems (Novum 1389) one feels like the neglect has been unjustified. The Anthems may not contain much of the irresistible melodic elements one expects of Purcell; nonetheless we hear a composer of grand invention and distinctive personality.

Perhaps the first thing one notices is the special sonority of the music.The strings, according to the custom of the times, are tuned lower than their modern counterparts, giving a rich and somewhat less piercing sound. The tenor (violas) and bass violins are exact reproductions of large bodied examples of Blow's era. Catgut strings and the shorter bows of the period are used. The overall effect is more resonant than a modern string ensemble, mellower. The blend with a period organ is more complete than would be the case with standard modern string instruments. The Choir of New College Oxford calls for, as was customary for the times, trebles and altos (a boy's choir) as well and tenors and basses.

The overall effect is uncanny and fascinating.

Imitative counterpoint abounds as does a stately unfolding and genuine artful craftsmanship, and an intimate feeling born of the smaller choir and chamber orchestral forces.

This one is a joy to hear, and for me a great introduction to the music of John Blow.

Unreservedly recommended.
Posted by Grego Applegate Edwards at 5:21 AM