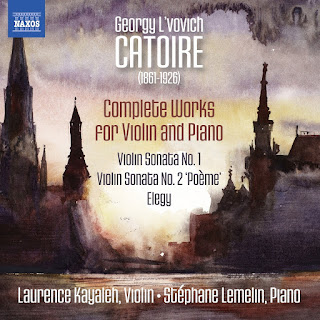 If nothing else, and I imagine there is more to him, Russian composer Georgy L'vovich Catoire (1861-1926) wrote two strikingly beautiful sonatas for violin and piano. We hear them plus the brief "Elegy" on the recent Complete Works for Violin and Piano (Naxos 8.573345), nicely performed by Laurence Kayaleh on violin and Stephane Lemelin on piano.

Catoire was influenced by Wagner and the French impressionists. In Russia he is remembered more for his music theory but the sonatas have a very fertile and loquaciously winding melodic-harmonic vocabulary that has advanced chromatic qualities to put the music on the lyrical edge of modernity.

There is a depth of expression that is as exploratory and flowing as the best of the late romantics and/or early impressionists but goes its own way with long form unfoldings as involved as they are steeped in an inward directed beauty.

In short Catoire is no slouch. Kayaleh and Lemelin do not fall into an overblown, heart-on-sleeve sort of interpretation, but rather keep a respect for the exceptional flowing trajectory of the music.

Thus though I have never heard these works previously, I feel the power of the duo's conviction and languish in the sensuous originality of what Catoire is about here.

The program will appeal to all those Russophiles seeking new and movingly interesting works from the dawn of our modern era. But even if you aren't quite a Russophile at this juncture, you will find music of depth and importance, worth your time surely.

Recommended.
Posted by Grego Applegate Edwards at 5:56 AM