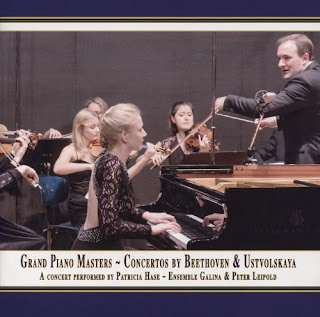 Piano phenom Patricia Hase teams up with Ensemble Galina under Peter Leipold for a most unusual but successful combination of piano concertos: Beethoven's "Piano Concerto No. 2 in B-flat Major, Op. 19" (1790-1801) and Galina Ustvolskaya's "Concerto for Piano, Strings and Timpani" (1946).

The Beethoven is happily heard in the chamber reorchestration by Vincenz Lachner in 1881, a first recording on CD.

This is a live recording from the Hanover University of Music this past October, 2015. It has a beautiful ambiance and everyone, clearly, is inspired.

The string orchestra arrangement of the Beethoven gives the work an intimate sweetness and fire which is intensified by the sparkling brilliance of Patricia Hase, who sounds positively angelic in her performance.

The Galina Ustvolskaya (1919-2006) work further reminds us that her time has come. I covered a recording of her solo piano works earlier (see search box) and was tremendously impressed. The Concerto only confirms that initial encounter with a swell of original, majestic and unsettling luminescence that confirms her as no Shostakovich clone (whose pupil she was) but rather a Russian dynamo in her very own light. Hase and Ensemble Galina unfold the tremendous expressivity of the work so that we feel the enormous creative force unleashed by Ustvolskaya in no uncertain terms. The climax is riveting, unprecedented for the time, still packing an enormous catalytic punch.

The end result is one ear-opening album that affirms Patricia Hase as a lyrical marvel and expressive titan, with Ensemble Galina under Peter Leipold a youthful torrent of energy and sensitive passion. The Beethoven is revelatory, the Ustvolskaya even more so.

This music makes me smile!! I recommend it to you on multiple levels without the slightest hesitation.
Posted by Grego Applegate Edwards at 5:12 AM