Michael Nyman, The Man Who Mistook His Wife For A Hat, Nashville Opera, Trevino, Williamson, etc. 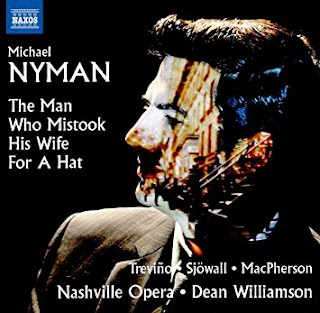 I first read neurologist Oliver Sacks' The Man Who Mistook His Wife For A Hat when I was working for Scientific American (Books) in the later '80s. Michael Nyman's opera in world premiere CD followed soon after and I was impressed with Michael's treatment. So-called minimalism in music reigned and Nyman managed to come up with his own version and simultaneously to move beyond it. His treatment of the Sacks case study captured the wonder and trauma of the man who had acute neurological impairments that gave him severe problems recognizing images--which in turn resulted in incredible mis-recognitions.

Time passes on and we now find ourselves with a new recording of the chamber opera by the Nashville Opera under Dean Williamson. The three principals Matthew Trevino, Rebecca Sjowall and Ryan MacPherson do a great job realizing the roles and the chamber orchestra fills out the score with zest and brio.

It is a milestone work in its first recording. The new Nashville Opera version virtually matches and even surpasses it at times.

Nyman fans should have both versions; others will find the Naxos release satisfying and moving. It is an opera of startling dimensions and superior musical content, as exciting as it is humane. It somehow captures what it is to be human by addressing a tragic lack.

Bravo!
Posted by Grego Applegate Edwards at 5:27 AM