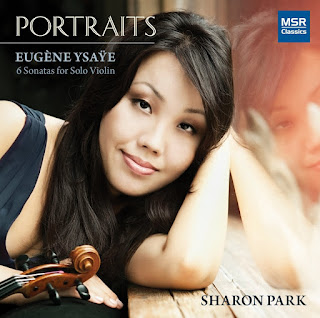 Eugene Ysaye (1858-1931) was during his lifetime one of the most acclaimed violin virtuosos alive, known by many as the "king of the violin". He also composed works to showcase his virtuosity. The Six Sonatas for Violin Solo, Op. 27 (1923) is one of the most demanding and beautiful of his works. Violinist Sharon Parks brings us a detailed and impassioned reading of all six on Portraits (MSR Classics 1631).

The demanding and bravura music is basically an embodiment of the expressive romantic solo violin tradition that goes especially back to Paganini but shows the sure hand and originality of Ysaye. Unlike Reger's solo violin work it does not often directly show roots in Bach, although there is a genetic relation, an occasional quotation and a general spirit that goes back to Johann. The sonatas do also generate more extroverted declamations in the manner of concerted cadenzas typical of the showcase works of the 19th century. Nonetheless the sonatas were initially inspired by hearing Joseph Szigeti play Bach's Unaccompanied Sonatas.

There is a supreme seriousness of purpose that evinces much more than technical feats. It is superior violin virtuosity that never short shrifts content. Each sonata is dedicated to a violin virtuoso of Ysaye's day and in part reflects a response to each violinist's way of playing. So there is one sonata each dedicated to Szigeti, Jacques Thibaud, Georges Enescu, Fritz Kreisler, Mathieu Crickboom and Manuel Quiroga.

Sharon Park meets the challenge of this set in the most musical ways, showing a polish and a substantial dash of flamboyance very suitable to the music. It is for her a definite triumph.

I for one am very glad to have her readings. If serves as a sort of definitive view of these important works.
Posted by Grego Applegate Edwards at 5:38 AM