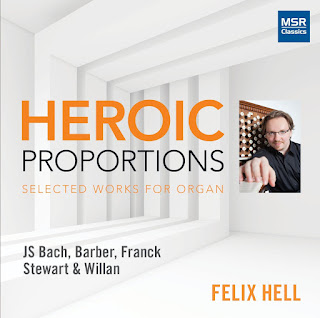 Those who appreciate the organ music repertoire will find Felix Hell's Heroic Proportions (MSR Classics 1542) of interest. It is a wide-ranging selection of works spanning wide period and style sets, with as the title suggests a heroic organistic flourish at the forefront much of the time.

The common link throughout is the fine artistry of Felix Hell. He gives each work a detailed and very worthwhile reading.

The Bach "'St. Anne' Prelude and Fugue in E-flat Major" has the stately seriousness of purpose one might expect. And the Franck "Piece Heroic" (1878) brings an epic, determined dimension into play.

William Strickland's organ arrangement of Samuel Barber's beautifully melancholy "Adagio" translates the string parts to organ with dramatic intelligence. It must be heard closely, however, as its subtlety demands your attention.

Lastly we have two lesser known works , the World Premier Recording of Eric R. Stewart's "Sonetto" (2012) and Healey Willan's "Introduction, Passacaglia and Fugue" (1916). The Stewart work has modern fireworks and heroic dash. The same can be said for the Willan, with the nearly 100 years between the two works a factor the ear can recognize without trouble.

And so Felix Hell brings us a substantial recital that all organ enthusiasts will appreciate.