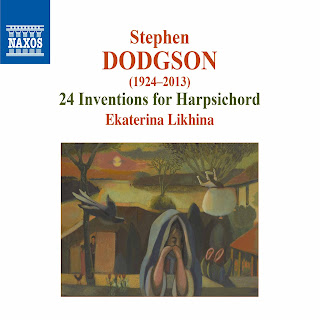 Nearly every day lately I am surprised to hear something unknown and unexpected. Today's classical-modern selection clocks in and it's another I never might have known were it not for the CD playing now on my player. I speak of the World Premiere Recording of something by Stephen Dodgson (1924-2013). Namely we have Ekaterina Likhina playing Dodgson's 24 Inventions for Harpsichord (Naxos 9.70262).

Here is a modern English composer of obvious caliber. He presented a first set of inventions in 1955, when he was only 21 years old.  Three more sets followed through 1990. All four sets of inventions comprise the full 24 performed here. The short pieces all have a Scarlatti-like rhythmic drive, expressiveness, and compact incisiveness, thriving within a chromatic-diatonic realm one might call neo-classical without doing the music an injustice, although the composer himself might have had something to say about that category. It is another old-in-the-new set of works, with an obvious nod to earlier inventions but a 20th century modern outlook at base.

Stephen's widow has been on hand, happily, to guide Ekaterina Likhina on tempo, notation and character. The resulting performances sound to me definitive. Liners say that these Inventions are among the most important works for harpsichord in our times. Based on the more well known modern works I have heard repeatedly I would have to say that these compare most favorably.

There is much excellent music to absorb. The complexities and inventive detail in these works demand multiple and unsuperficial hearings to grasp fully. It is worth the trouble, since in the end there is a great deal to like!