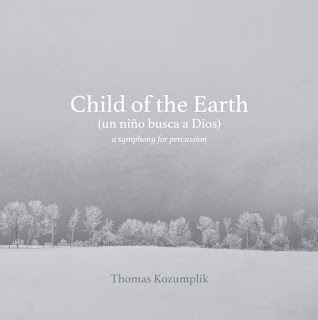 Music Starts From Silence (CD MSFS-07) presents Thomas Kuzumplik's symphony for percussion entitled Child of the Earth (33 minutes). The New York University Percussion Ensemble under Jonathan Haas handles the performance challenges with with precision, enthusiasm and a little bit of soul. It comes to us in four movements that compare and contrast interestingly and imaginatively.

It is a work formed understandably of some nicely complex rhythmic-melodic elements as much through-composed as sometimes slightly hypnotic (without being specifically Minimalist). There is development, movement, growth throughout, along with a deft scoring knack. Mallets and pitched percussion instruments take on a critical role yet naturally unpitched "drums" per se are out front in the proceedings as well.

The final movement, "Beauty and its Passing," has much rhythmic drive and a near-Rock riff insistence that wins the day and brings considerable memorability to the experience of listening. The three movements before it are more overtly Modernist at times in their open through-composed qualities, yet they too often enough can be based around rhythmic or harmonic cycles and/or pedal point-drones that recur and vary.

When considering the intrinsic merits of both the work and its thoroughgoing idiomatic performance by Haas and the New York University Percussion Ensemble there is no doubt that we have a landmark percussion ensemble development, as much a pleasure to hear as it no doubt it is to perform. Very recommended for percussion and Modern New Music Postmodern enthusiasts.

Posted by Grego Applegate Edwards at 7:43 AM